How You Might Be Climbing The WRONG Ladder In MLM And Not Even Know It! 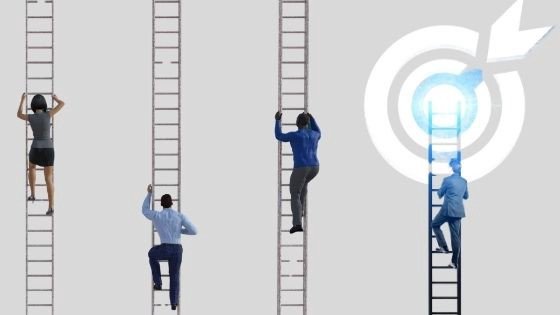 It wasn’t until I opened my mind to evaluate another network marketing company that I started considering to leave the company where I had planted my flag and had been locked into for SO LONG.

I had been with this company for 9 years and had already built a massive team of 9 thousand reps with a massive customer base and I was the 3rd highest rank in the company from the top.

Let’s call it company A. Its funny, because the first letter of name of this company actually does start with an A. There . . . that’ll get guessing.

So why would I even consider leaving?

Well, there were many factors. To put it plainly, over the years, the company had gone one direction and I had gone in another.

But the needle that broke the camels back was when I got to see the consensus in the industry around company A and I had blinded myself from that truth for far too long.

The way this all unravelled, was I got invited to fly to Italy to evaluate this MLM company, let’s call it company B, during the company’s official European convention.

And who in the right mind would say no to a FREE paid trip to Italy anyway, right? So I accepted the offer to fly in and spend intimate time with the key leaders steering the company’s ship and give it a serious consideration to potentially join it.

On the day I arrived I was gifted a beautiful leather journal to take my notes in throughout the convention.

I have scribbles in this journal saying: Italy is beautiful. Loved the pastas, the colosseum is glorious and extraordinary.

The convention so extravagant, with dance skits? So weird. Big hype. Weak Training and event schedule. But 20 year old youngsters with no industry experience are just killing it with record breaking incomes. How is that possible?

On another day, I will share with you how this was possible because it was rigged. For now let’s circle back to a conversation that happened the last day of my stay at the hotel lobby with another industry professional who was also invited there to evaluate company B. Let’s call him John.

That afternoon, a bunch of us were hanging out in the lobby, recovering from a long convention weekend and I had just been introduced to John by one of the company B leaders.

I turned to John and asked:

So John, what company are you with?

At the time, Veema had been just shut down and was going through an investigation and law suit and John was looking for a new company he can call his home.

John shared with me the inside scoop of what happened with Veema and returned back the question to ask what company I was in.

I told him: the A -word company.

He said: yeah, it’s a real hard company. I can’t believe you were able to build that big and make 6 figures with that company. It’s a nightmare. The compensation plan is a nightmare. It doesn’t pay much. There’s no money.

John was right and for so long I had chosen to ignore this truth.

You see he had no vested interest to jab my company to recruit me into his. He was not playing the “mine is better than yours” game that many network marketers get into. John had no vested interest at all, he was simply sharing his expert evaluation of why he would never join the A-word company. In all truth, he was right.

That same evening several other high level networkers from other companies who were evaluating company B shared the same perspective John had about company A. In a way, I felt defeated because “I couldn’t recruit colleagues in the industry to company A if it tried!”

Come to think of it, no one in company A was recruiting professionals from other companies because it already had a reputation of being an impossible build.

These conversations were so revealing. They allowed me to realize that the only people in the industry that thought company A was a good company were the people that were in it who either didn’t know or didn’t want to know what else was out there!

Every professional outside of company A, shared John’s perspective.

Every professional who had already left company A, felt the same way.

Every professional who had evaluated it all felt the same way.

They all said the same things. They said things like:

“That company is hard”

“That compares a nightmare”

“Those guys over there are crazy”

If you’re evaluating an MLM right now, try your best to get other industry insider’s perspective who don’t have a reason to give you slanted view on the company you’re considering to join.

Finding out what other network marketers think about a company may be misleading but it can also be insightful. Just be careful of their agenda.

Most networkers will always share with you an opinion that favors and validates their own position, sometimes however, you can get great insight from networkers who either aren’t committed to a single company or are more invested in advancing the industry rather than one specific company.

There may be a general understanding in the industry about an opportunity if it’s been around long enough for the seasoned veterans of the industry to have all had consistent interaction with it. Their experience and insight is PRICELESS.

If the company you’re evaluating agrees with your personality and spirit, and you’re excited about helping others be successful in it, then you might have found the company you can call your home.

But also give your decision a pause by speaking to industry professionals.

Their insider’s perspective and veteran experience in the industry could save you thousands or even 10’s of thousands of dollars, and years and years of climbing the wrong ladder. Industry veterans are the guardians of the industry, one priceless conversation with one can keep your reputation in tact for the right opportunity when you find it.

The questions to ask are:

#25. What is the reputation of this company among industry insiders?

#26. Who can I ask about this company who will give me an objective viewpoint?

For you to be successful in network marketing or any business, adopting a self-starter mentality

What Unicorn Up-lines Can Do for Your Business?

Do unicorn up-lines exist? Most reps only get on the radar of their high ranked

Unicorn Up-lines? Do they exist?

One of the biggest reasons why new distributors struggle, give up, and don’t get the

Learn From Where MLM Pros Are Going!

When a company is just launching, it often attracts top professionals and full time leaders

When you catch a company at a special, once in lifetime, timing, then building it